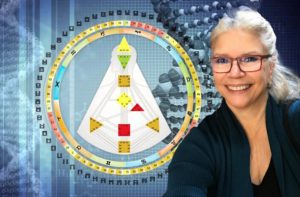 I began my journey with Human Design in 2005.  My life has taken me on many roads that somehow contained a common theme. This theme has been the deep drive to understand ‘existence’.

I was born in Northern California and grew up in the farmlands of the Central Valley. In my years at University, I began with European Studies, moved over into Anthropology and Archaeology; which brought me into Religious and Native American Studies; while I also worked on digs and surveys in the American Southwest. A moment of intuitive insight guided me to opera and I began as a Voice Major in San Diego State University’s Music Department. After two years there; another moment of guidance came and I changed my major again, and finally earned a Bachelor of Arts in Theater, with a minor in Religious Studies.

Next path on the journey was to earn a Master of Fine Arts at U.C. San Diego; after which I moved to New York City. I worked a total of 8 years professionally as an actress; on the stage and television. What a gift that was! For through acting I gained a deepening of insight into human behavior, both by being in the industry itself and through understanding the characters I played.

Threading throughout these years was my continuing exploration of alternative understandings of existence… of being self-reflected awareness in form. This led me to leave NYC on a one-way ticket to Europe in late 1986. I felt I was being directed towards something specific, though I could not sense what that was. I let go of every aspect of my life when I left NYC – my relationships, my possessions, my art and career… The next year (1987) was lived in a form of a mystical fugue, mostly in the mountains of Northern Italy on the shores of Lago Maggiore.

The following years were truly life-changing. I floated with the winds of fate as they guided me forward. I traveled throughout Europe, to India and Asia, lived in spiritual communities, met my life partner and gave birth to a beautiful son. In the years, I have worked as a Clairvoyant-’Empath’, a past-life regression therapist and an astrologer; I have learned from the wisdom of many beautiful teachings, including Essence and Energy work, the Enneagram, meditation, tantra… many, many….

And then… I met The Human Design System and its founder, the mystic, Ra Uru Hu…

Throughout the years, I had shared the journey with others seeking understanding of ‘Self’; of ‘Enlightenment’. Each of the modalities that I learned from had addressed abundant aspects of this. Yet, the teaching and/or tools for an integrated awakening never seemed to be complete, didn’t fully provide a unique path for each individual – leaving this integrated awakening to a life-path of serendipity of a few.

As I began to learn about Human Design and sink deeper into understanding existence through the filter and tools of Human Design, through the simple yet profound practice of following strategy and authority – I began to have a sense of recognition of this as a possibility for each of us – in each our own way – a possibility to uniquely differentiate. And, that the only authority we need – that we have –ultimately, is our own – our own inner authority found in our own beautiful form.

Life continues to bring its challenges. The wounds and pain of the not-self aspects of myself that were established through so many years of conditioning are still part of my journey, this ‘being Darshana’ journey… and yet, ever so slowly I have begun to feel that the veil that shields this Maia from the ‘totality’ or Absolute is becoming less dense, less isolating… less of a life about the struggle to survive, and more; much more, about the soft ease of living in my truth, as my unique and weirdly wonderful individual design.

What is this design of mine? It is that of an Intuitive Projector on the Incarnation Cross of Service – here in service of Individualism, of Transformation and of Alignment -both for myself – for my tribe – and for the greater whole. I now live most of the year in Copenhagen, Denmark and usually travel each year to Northern California offering sessions, classes and on-going guidance in the experiment of living Human Design. I have been teaching online classes at Human Design America and the International School of Human Design (IHDS) since 2012, as well as through my own non-profit foundation, Tao of Human Design.

Ah… the Human Design system has brought to me a clarity, a precision and continuing revelation of awareness through being the witness, through… ‘Being’. So, dear ones on this earthly journey with me – I can say that if you respond to the call of this knowledge, you will begin a wondrous journey… a return to your unique, individuated and essential Self. I look forward to the possibility of sharing this journey with you.

My Studies in the Human Design System 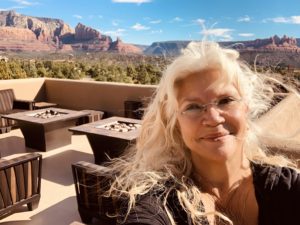